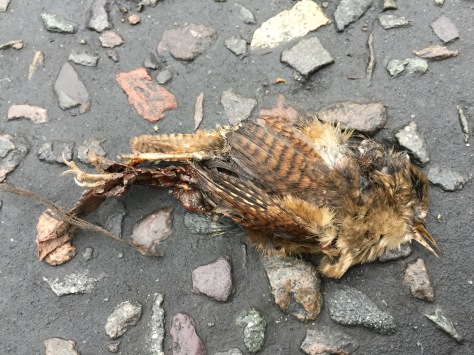 “Are not two sparrows sold for a penny? Yet not one of them will fall to the ground outside your Father’s care.” Matthew 10:29

This small bird has been lying here on the road for some time. It is beginning to decompose and has been run over a few times. No one really notices, and many would be disgusted at its small body wasting away… “it doesn’t really matter, it’s only a bird..!” we might say…

The scripture says differently. This little bird fell and died, only when the Father in heaven said so. It’s short little life ended when it was time for it to die, so some event, unexpectedly for the bird, caused it to fall to the ground.

Jesus gave this illustration to show God’s love toward His people. Those who put their faith in Him, become the centre of His attention. He watches over them, like a hen would look after her chicks. Jesus himself wept over Jerusalem because the people, His own people, would not come to Him, and refused His offer of forgiveness, protection and love. There are many like this today. They refuse the offer of mercy, because they refuse the messenger. Jesus was not what they expected, and he did not fit their concept of a religious leader, so they refused Him.

The Lord Jesus Christ is no ordinary man, nor anyway like earthly leaders. His love always holds out to us when we fail and when we entertain ideas of this world. He loves us and directs our paths, even when we go astray. Sparrows go everywhere, yet His love and care for them as His creatures never diminishes. So also for those who seek Him. Every part of their lives is over-shadowed by His undiminishing love. Though all others fail and disappoint, His love remains faithful.

One day we also will face death. At that moment, our Saviour Christ will be closer than any other and will guide us safely home, across the threshold of death, into His eternal kingdom. Don’t be discouraged… even as I write this, I comfort myself, with these truths from God’s word. If he loves sparrows, does He not also love the people He died for and who live everlastingly?

“The eyes of the Lord are on those who fear him,
on those whose hope is in his unfailing love…” Psalm 33:18

A place to avoid at all costs End times Fruit God of failure Gospel comfort Gossip Grace High and lifted up Jesus the Lord Message of warning Power Psalm 23 Rejoice Riches Seamless Skipping Solace Strength The Christian life The Code according to emoji The glory of God The gospel call The kettle The Kingdom of GOD The woman The world's stew Uncategorized Understanding Who is it? Words from Someone