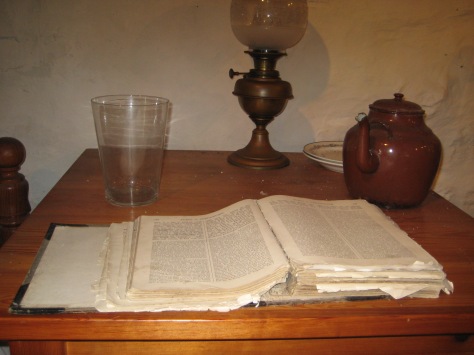 The old covenant: This was weak and bound to fail, because it was between the creature man and a Holy God. The man could not, nor ever could keep the covenant. Mankind made a wretched choice and chose his own way rather than keeping true to his creator. The covenant broke down almost straight away and mankind fell into ruin.

The new covenant actually existed before the old covenant: This was a strong and Holy bond, because it was between the three persons of the Holy Trinity, and depended on them only to keep it and sustain it.

The first covenant was then the one made between the persons of the Godhead, so that sinful man could be redeemed and sanctified and brought safely into heaven itself. The covenant made with man, was seen to be useless, as it could not be upheld by the weak, human party.

God therefore demonstrated the weakness of sinful man and the glory of His own Holy strength and power to buy back from slavery and death a people for his name.

God the father willed this event, the Son gave himself as a ransom for many and the Spirit calls those who are being saved and indwelling them and keeping them until the day of final redemption. Thus the Holy covenant is fulfilled and sinful man can now enter in with true confidence that God is able to save to the uttermost, those that come to God through Him.

In the scriptures there are many covenants between God and His people. They are the great and precious promises that fill the pages of scripture. These promises are true and forever sure. Not one of the promises of God have ever failed or ever will. God is the upholder of all things, and it is His power alone, that keep us in all circumstances. The promises of God are certain, because of who He is, and they reflect His holiness, supreme and total power, His never failing love, His mercy, justice, wrath against all sin and deliberate sinners. The attributes of God are the manifestation of His eternal being, and His desire is to save all human beings, who humble themselves and trust in Him. This is determined by the everlasting covenant with Himself.

We can know the powerful and steadfast outworking of these covenants, agreements and promises in our daily lives, day by day.

A place to avoid at all costs End times Fruit God of failure Gospel comfort Gossip Grace High and lifted up Jesus the Lord Message of warning Power Psalm 23 Rejoice Riches Seamless Skipping Solace Strength The Christian life The Code according to emoji The glory of God The gospel call The kettle The Kingdom of GOD The woman The world's stew Uncategorized Understanding Who is it? Words from Someone